The Story of Donatella Versace & The House’s Most Iconic Pieces 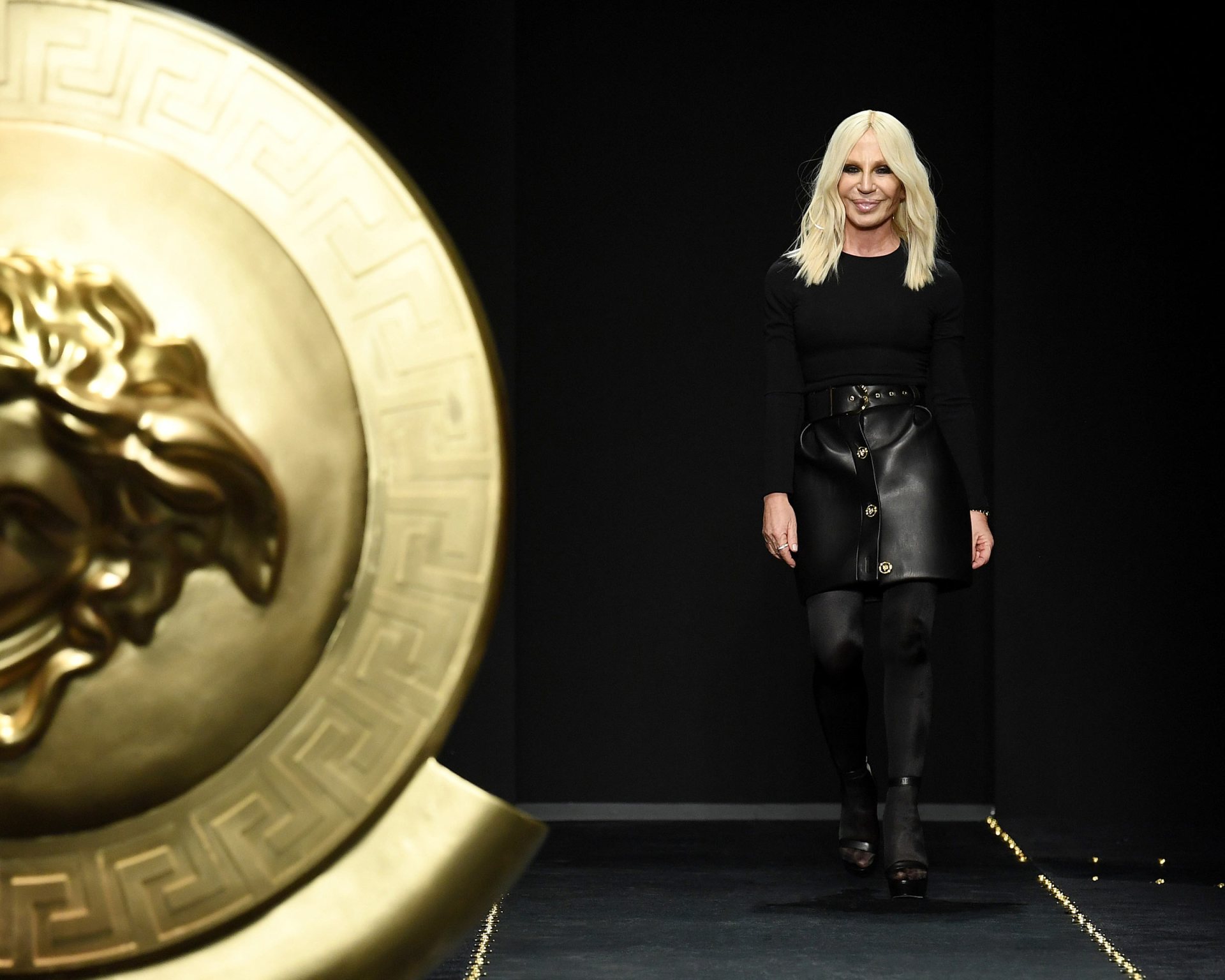 “I dress the most powerful women. Fashion is not going to change the world. But it can empower women.”

Fashion, indeed, may not change the world. But fashion certainly changes people – for the better. Fashion even influences the powerful figures running their very own fashion empires. One of the biggest houses in the world run by a legendary woman? Versace, by Donatella Versace of course, Vogue Italia’s latest cover star. And thanks to Vogue for stepping in, Donatella Versace will tell you exactly how to pronounce the name. Because apparently, we’ve all been saying it wrong (cringe).

Ambitious women all around the world are successfully paving the way for future generations. With a clear vision, can-do attitude, and beautiful products, as a result, lead designers like Donatella Versace, and even Miuccia Prada, carry a unique story that is clearly channeled through their work.

The story of Donatella Versace is a gripping one, and she’s a stellar example of a woman who honors family in all the creative decisions that she makes. Just by her work ethic alone, she’s never afraid of embracing exactly who she is. Read on to learn more about one of the most impressive and powerful fashion designers in the world right now.

From Loss To Fortune: The Story of Donatella Versace

Donatella Versace was born in Reggio di Calabria, Italy, and raised by a family of dressmakers. She was particularly close with her older brother, Gianni, and took great interest in his creative endeavors. Initially, she had plans to become a teacher, studying various languages at the University of Florence. But shortly after, she (to no surprise) became Gianni’s advisor when he established Versace in Milan in 1978. Donatella was his right hand and source of inspiration for many of his designs. She was a “very powerful critic” throughout the process, and began inserting some of her designs into the brand’s aesthetic starting in the early 80s. Due to her impeccable taste and successful contributions, Gianni gave her the Versus line as a gift.

Donatella Versace is not only a famous designer but also a mother. She has two children, Daniel and Allegra, with model Paul Beck. Her children are active members of the Versace empire, Allegra in particular serves an important role on the board of directors.

The sudden death of Gianni Versace in 1997 was a tragic loss for the family and for the Versace business. Leading up to his death, Donatella Versace was already taking on a lot, “unofficially taking over the business” while Gianni was battling cancer. Almost twenty years after his death, she honored her brother in a special collection for Spring 2018 called “The Versace Tribute Collection” featuring Versace-esque pieces: Medusa medallions, bright yellows, bold blacks, and animal prints, and of course baroque-styled motifs. All the models Gianni has worked with throughout his career supported this show.

Some of the most iconic styles that come to mind when we think of Versace are sophisticated bondage, loud and colorful pieces, and baroque prints. But many were conceptualized by none other than Donatella herself. That famous “Jlo dress” at the 42nd Grammy Awards in 2000 is undoubtedly one of the most stunning pieces ever to be created. Sandra Bullock also wore the same dress in a red/orange colorway. And not too long ago, Jennifer Lopez recreated that iconic moment wearing that Versace dress for the Versace Spring 2020 show. Still in awe.

Aside from Versace’s ready-to-wear pieces, Donatella Versace has quite the eye for leather goods and accessories. From clutches and tote bags to silk scarves and platform pumps, we can’t get enough. These everyday pieces are fashion-forward and empower women to feel their truest and best selves. Read on for some of the most iconic Versace styles, prints, and notable collaborations.

The Medusa Top Handle – the latest ‘It’ bag of the moment for the house featuring a removable chunky enamel chain strap, top handle, a matching Medusa plaque, and constructed of premium leather – all crafted in Italy. Sizes range from Small to Large and colors come in practically all the shades of the rainbow. This style is a very versatile design and can be worn in many different ways for a classic or trendy look.

Virtus V Collection – Virtus translates to courage, strength, and character. Distinguished by the iconic letter V, this collection includes many styles such as the top handle bag, camera bag, wallet on chain crossbody, and shoulder bag.

The Signature Medusa Coin Tote – Part of the 2018 tribute to Gianni, the Medusa Coin tote is a signature piece of the Versace collection with subtle hints of bondage and embellished with Medusa medallions. This and more are reiterations of designs sourced from the Versace archives, breathing new life in some of the most iconic pieces Gianni Versace created.

The La Greca Print – a Greek-inspired motif mimicking a maze is known as meander, which refers to a continuous line. The Le Greca print comes in Black Caramel, and Black Grey. First introduced for Fall Winter 2021, the Le Greca print is an iconic monogram for the Versace house, and implemented in the latest pieces.

The Versace x Disney Collaboration – This collaboration is a limited edition collection released only in specific countries for a limited amount of time. The popularity of collaborations are definitely on the rise. An item from a collection like this is a great way to snatch a coveted and valuable piece.

The Fendace Collaboration – Fendace is the iconic pairing of Fendi x Versace – a unique partnership between two well-respected Italian houses that reversed roles for Spring 2022. The mashup, which includes clothes, bags, and small accessories, is technically not a collaboration (just like the Gucci x Balenciaga hacking), but a pairing. But regardless of what you call it, Fendace is quite an intimate and creative experience.

Discover our growing collection of pre-loved handbags from Versace at FASHIONPHILE!

Have You Heard? We've Got The Goods

[vc_row][vc_column][vc_column_text] Have you heard? Our Neighborhood Goods partnership, with locations in Chelsea Market, Legacy West, and South Congress, is cultivating a more sustainable future. By empowering resale, together we’re reducing fashion’s impact by saving one handbag at a time. We bring the products and services, and Neighborhood Goods makes the in-person shopping experience an unforgettable…

[vc_row][vc_column][vc_column_text] What’s not to love about a Hermes bag?  If you’re truly looking for an investment, a Birkin is the way to go. But as one would expect, the Kelly bag is the more versatile investment option. In fact, demand for the Kelly bag is increasing by the minute, almost beating the Birkin bag. Even…