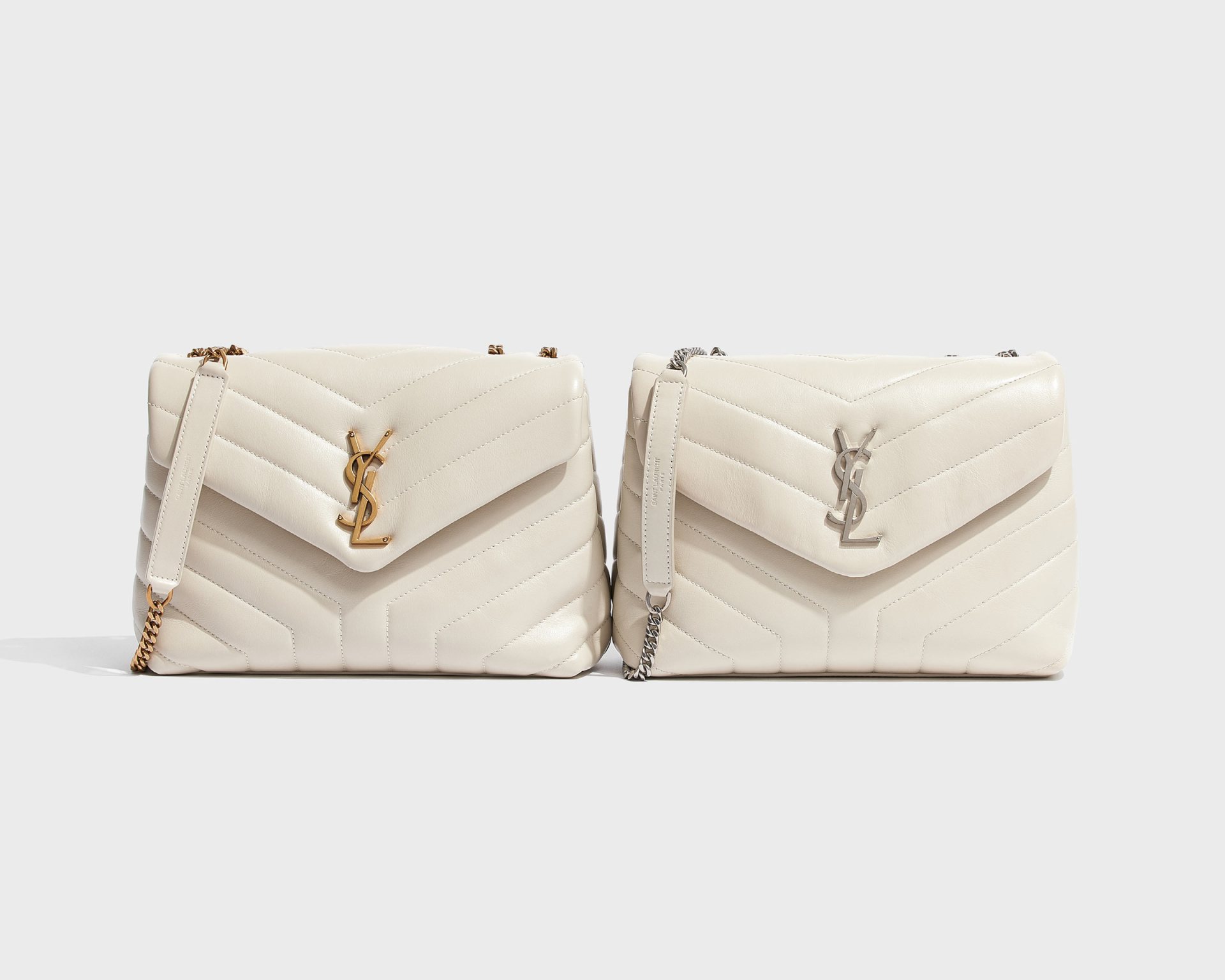 No surprise there. We know that because the Saint Laurent Loulou is a top-selling style, along with the annual best-sellers: the Gucci Soho Disco, Chanel Double Flap, and Louis Vuitton Pochette Metis just to name a few. Due to its undying popularity, our authenticators have perfected the nuances of Saint Laurent brand signatures, which means our experts are quickly and effectively catching the fakes.

At FASHIONPHILE authentication is truly a science, and we are committed to honoring all brand standards. The Loulou bag remains high up on the list of cult faves. Timeless and elegant, the Saint Laurent Loulou satchel is a coveted piece. Nearly every fashion pioneer knows it retains its value well.

More than just your everyday bag, the Loulou is distinguished by many iconic features including the ‘YSL’ monogram. It continues to be recognized by those who appreciate luxury and quality. We have hundreds of Loulou bags at FASHIONPHILE and each one goes through a rigorous authentication process to ensure that it is 100% authentic or your money back.

Read on to learn more about the style and some quick tips to authenticate the beloved Saint Laurent Loulou satchel.

About the LouLou Bag

The Loulou handbag collection is a series of Y-quilted soft box-shaped bags available in an assortment of colors, sizes, and textiles. And honestly, it is such a classic style that it comes as no surprise that it’s also one of those investment pieces people wear and keep for years.

The LouLou bag was named after Loulou de la Falaise, a fashion designer closely associated with Yves Saint Laurent, and a great influence on him and his work. New York Magazine called Loulou “the quintessential Rive Gauche haute bohemienne.” And that’s exactly what the Loulou bag is. Side note: For anybody wondering what Rive Gauche means within the context of fashion, it refers to hip, effortless, and rule-breaking style. Totally understand now why Saint Laurent Rive Gauche bags are a thing.

Due to the history between Loulou de la Falaise and Yves Saint Laurent, it only seemed fitting to create a core style and have it be named after her. Under the creative direction of Anthony Vaccarello, the Loulou bag was born in 2017. It definitely embodies both classic influences; it even has some subtleties of rock n’ roll, “a la Hedi Slimane,” as this style was released shortly after he exited. As mentioned before, the Loulou is a popular style, which means it is also highly counterfeited. Read on to learn about some of the most common indicators of a counterfeit Loulou Chain Satchel.

While certain components on counterfeit bags can be pretty spot on, it’s important to have an understanding of all brand standards. At FASHIONPHILE, we can tell right away when something doesn’t add up. And it doesn’t take much for an everyday individual to tell, too. Especially when it comes to utilizing the senses, like touch and smell. Counterfeit bags will use poor quality materials, and most often than not, they carry a fake scent as well. By that, we mean fakes will often have a strong chemical scent or factory-like smell, that doesn’t go away indicating low-quality leathers being used. This can be damaging to your health, and of course, it is damaging to the environment.

An important design feature of the Loulou bag is its ionic chevron quilting which is done so to mimic the letter Y,  a tribute to Yves Saint Laurent himself. Depending on the size of the Loulou bag, these quilts are very specific in the spacing, stitching placement and techniques, and amount of quilts present.

Logos are a huge part of branding for a luxury fashion house, and they also connote status and taste for the wearer. Being able to show off these iconic logos is what defines these coveted bags.  And in the case of the Loulou Chain Satchel, we can’t imagine it without the iconic YSL hardware. It just wouldn’t be the same.

The YSL monogram of course stands for the initials of Yves Saint Laurent. It was created in 1961 by one of the leading graphic designers of the time, Adolphe Mouron. It’s one of the only logos with letterings artfully positioned vertically. Today, the YSL insignia proves to be truly timeless.

In these photos, it may be harder to detect, but when it comes to counterfeits, the font proportions and edges will never be close to correct. On the fake hardware, look out for sharp edges and an obvious rough, mirage finish.

Similar to the branded hardware for Saint Laurent, be sure to look out for poor and inconsistent application of the embossed logo. These features are just as important and counterfeiters never get it right – no matter how “similar” it may look at first glance. On fakes, you’ll often see that the spacing between the letters and the font style is incorrect. Application is also very important to observe, as counterfeiters go way too deep.

Even though these comparisons may appear to be shockingly similar, our authentication supervisor, Chloe Fernandez, reassures that “despite counterfeit bags becoming more and more sophisticated, our unique in-house process allows us to inspect every detail, nuance, or difference under the eye of our magnification tools.” Additionally, FASHIONPHILE owns decades worth of valuable research and development materials that date back to its foundation.  Takeaway? No matter how “good” or “bad” a fake item may be, we’ve seen it all.

To ensure your item is 100% authentic, it is important to shop with trusted resellers like FASHIONPHILE. Our authentication process is a science and that means, there is no room for error. Our technology is constantly advancing and our team is quickly growing. Before you leave, take a moment to learn more about our accredited authentication process.

Discontinued (But Not Forgotten) Louis Vuitton

[vc_row][vc_column][vc_column_text] We’ve all heard the phrase, “people want what they can’t have.”    Louis Vuitton has been limiting and even discontinuing, the production of many of its monogram items. This is an effort to ramp up sales on their more expensive, all leather bags - which in turn, helps them maintain their luxury status. With…

[vc_row][vc_column][vc_column_text] When some of the most notable designer brands come together, anything is possible.    Collaborations have been going on for as long as we can remember. Burberry x Supreme, Fendi x Skims, Patek x Tiffany…the list goes on. And of course, there are endless Louis Vuitton art collabs out there. You can even find specialized…