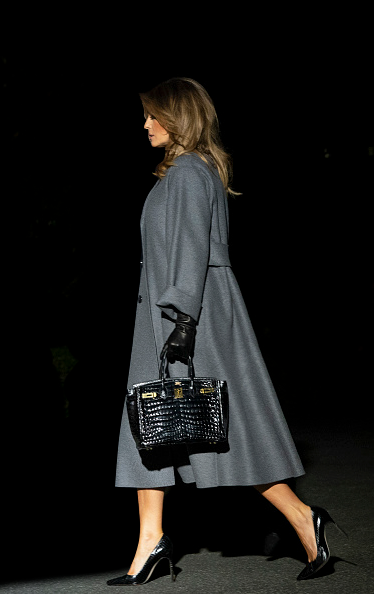 “Melania Trump’s Birkin Collection is Worth $114,000 – and We Have Them All on FASHIONPHILE”

No matter where you fall on the political spectrum, everyone can agree on one thing: Melania Trump has an enviable collection of Hermès Birkin bags.

A recent article from InStyle.com reported that the First Lady has been seen sporting no less than six different Birkins, ranging in color, material, and size, worth a whopping $114,000 since moving into the White House. And that’s a conservative estimate. Luckily, you don’t need to be married to the Donald to score a lineup like hers–we have all of those Birkins (and more) here on FASHIONPHILE. In fact, shopping resale might actually be the best way to bring a Birkin home.

Hermès is notoriously selective about who can purchase a Birkin bag in-house. To work with the luxury fashion brand, customers either need to be a VIP (for example, an extremely wealthy client or a celebrity) or have a prior sales record with the brand–and Hermès will actually cut clients off if they feel they’ve purchased too many Birkins! As Caitlin Donovan, Vice President, Head of Sale, Handbag and Accessories at Christie’s auction house, told InStyle, “Every client is given a certain amount that they’re able to purchase in a year. Even top Hermès clients often will supplement their collections by shopping secondary.”

On top of that, Hermès gets to decide what kind of leather, in what color, and with what hardware they’re “willing to sell to you,” meaning that Hermès customers have little-to-no control over what they’re buying. This type of exclusivity and personal approach is what makes a Birkin bag so expensive (a single bag can cost up to hundreds of thousands of dollars). So, basically, if you crave a collection like Melania’s, you’ve come to the right place.

The First Lady loves pairing her navy Birkin with simple outfits, like jeans and white button down. Does it get any more classic than that? Get the look for yourself with FASHIONPHILE’s collection.

Melania is partial to the Taurillon Clemence Birkin in the smaller, 30cm size (the classic Birkin is 35cm) and in a neutral shade of Gold. FASHIONPHILE carries this exact style in Chocolate ($6,950) and Iris ($8,950). For a similar look in Trump’s go-to shade, try our Hermes Vintage Ardennes Retourne Kelly 35 Etrusque in Gold ($6,095).

Mrs. Trump punches up her collection of neutral Birkins with a deep shade of burgundy, known to Hermès buffs as “Rouge.” Her version features chic gold hardware, like our Togo Birkin 35 Rouge Grenat ($10,180).

The must-have Birkin in Melania’s collection is without a doubt the 35cm black Birkin that’s often on her arm. The color and style make it extremely versatile–perfect for work, weekend, and anywhere in between–so if you can only spring for one Birkin, make it the Epsom Birkin 35 Noir Black with silver hardware ($12,500) or this version with gold hardware ($10,360).

This light tan color is called “Trench,” and just like its namesake, it’s a wardrobe staple–at least, it is for the First Lady! Steal her style with our Hermes Togo Birkin 35 Trench ($13,250).

The final Birkin in Melania Trump’s collection is the pièce de résistance: a 30cm black crocodile skin Birkin. Crocodile skins typically cost about three times as much as traditional leather Hermès bags, and are pretty rare. You can get a crocodile of a different color Hermes Shiny Niloticus Crocodile Birkin 25 Orange ($42,500) or the textured leather of the Hermes Taurillon Clemence Birkin 30 Noir Black ($10,250).

To add an extra Melania Trump touch, carry your new(ish) Birkin with the flap and lock system open. Her signature move communicates casual, cool, effortless elegance–but what else would you expect from a Birkin lover?

Finally, while $114,000 (may seem like an exorbitant amount to drop on six handbags, it’s actually a pretty good way to invest your money. Analysts have suggested that the Birkin is one of the smartest investment opportunities in the market, beating out gold and the S&P 500 with an average annual return of 14.2% over the past few decades. (Which might not mean much to Melania, but is awesome for you!)

Browse our entire collection of Birkins here. Interested in selling yours? Learn all about our resale process here.

"When It Comes to Finding Your Personal Style, Recommerce is the New Fast Fashion" As a young twenty-something in Los Angeles, I developed a bad habit. I was interning (for free) after college and working retail on the side, and I had no money...like, none. But since I was pursuing a career in the fashion…

"The Shearling and Fur Bags You Need For Winter 2018/2019" As winter sets in, everything in our life goes through a transition: we swap out our iced coffees for hot lattes, we upgrade to a thicker moisturizer to soothe dry winter skin, and we trade in cotton dresses for wool coats. But there’s one transition…